Bobby R. Burchfield prepared for his impressive four-decade legal career in the classrooms and in the stacks of the Jacob Burns Library at the GW Law. Now, Mr. Burchfield, through the Burchfield Family Charitable Foundation, has made a landmark gift to highly ranked GW Law to create a new professorship and recruit a nationally-recognized scholar to teach his passion, Free Speech and First Amendment law. The gift is the largest commitment yet made by the Burchfield Family Charitable Foundation, which Burchfield founded almost twenty years ago.

A renowned legal mind long sought after by leaders in business and politics, Burchfield credits George Washington University's GW Law as the foundation of his professional success.

“I believe in paying it forward, and the concept of noblesse oblige,” said Burchfield. “I have been very fortunate, and I gained so much in law school. I got a great education, made some life-long friends, and have been able to practice with some of the best and brightest lawyers of my time. Attending GW Law is one of the best decisions I ever made.”

GW Law Dean Dayna Bowen Matthew said that the Burchfield Professorship of First Amendment and Free Speech Law “brings the imprimatur of a world-class attorney to GW Law and will be highly sought after by top free speech scholars from around the nation.”

“Our constitutional law faculty are remarkable scholars and practitioners, and this gift is a game-changer that will allow us to attract a prominent free speech expert who solidifies GW Law as a premier school for serious First Amendment scholarship. This is a transformative gift that will have a profound and enduring influence not only on GW Law but also on the national First Amendment discourse. It serves as an example to others who wish to invest in attracting highly distinguished scholars to the GW Law faculty."

"I believe in paying it forward, and the concept of noblesse oblige."
- Bobby R. Burchfield

A longstanding pillar of support for GW Law, Burchfield, who was editor-in-chief of GW Law Review and graduated with high honors, has served on the Dean’s Advisory Council and delivered the Law Commencement address in 2015. In 2008, he established an endowed scholarship to support GW Law students.

Burchfield, who retired from the active law practice in March 2021, cited his belief that “free speech is both the apex and the foundation of a functioning republic and civilized society” as the impetus for establishing the Burchfield Professorship of First Amendment and Free Speech Law.

“Everything is intertwined with free speech. Without it, you can’t have informed and democratic elections, accountability of public officeholders, religious discourse, academic freedom, scientific inquiry, even commerce,” said Burchfield.

“This is the issue of our age. Free speech issues are in the news every day, from controversies about Joe Rogan and Dave Chappelle to efforts to ban books to controversies about what can be said on university campuses. It’s perilous to trust anyone to determine what speech should be heard,” said Burchfield. Encouraging scholarship in Free Speech by endowing this First Amendment professorship “is a way I can be impactful in preserving free speech.”

Over a remarkable 42-year career, Burchfield argued twice before the U.S. Supreme Court and represented major corporations in antitrust, class action, constitutional, and other commercial matters. He is also well known for serving as counsel for political parties and officeholders in constitutional and political litigation. His client list included three United States presidents, the leader of the U.S. Senate and the majority leader of the House.

"The Burchfield Professorship of First Amendment and Free Speech Law brings the imprimatur of a world-class attorney to GW Law and will be highly sought after by top free speech scholars from around the nation."
- Dayna Bowen Matthew, GW Law Dean

“Mr. Burchfield is a truly exemplary alumnus,” said Donna Arbide, GW’s vice president of development and alumni relations. “He has served on the Dean's Law Advisory Council for decades and has just completed teaching a seminar in Free Speech at GW Law. His outstanding accomplishments and contributions to GW and society were recognized in 2012 with GW’s prestigious Distinguished Alumni Achievement Award.

“We are so grateful for Mr. Burchfield’s incredible, historic gift, which is in addition to the generous endowed scholarship he established at GW Law to open the door for talented students,” said Ms. Arbide. “GW Law is already one of the country’s top ranked law schools, and this gift will lift it to new heights. We know Mr. Burchfield supports many institutions, and GW is honored he chose us to receive this record-setting gift.” 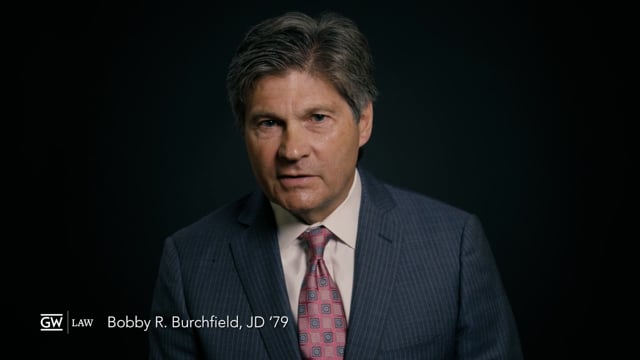