The History of GW Law

In the early years of the Republic, when the nation's new capital was no more than a small collection of public buildings separated by pastureland, President George Washington advised Congress to establish a national university at the seat of government.

His goal was to educate future generations of civil servants and thereby forge a national identity based on "principles friendly to republican government and to the true and genuine liberties of mankind." He left in his will 50 shares of stock in the Potowmack Canal Company for the endowment of a university "to which the youth of fortune and talents from all parts thereof might be sent for the completion of their Education in all the branches of polite literature-in arts and Sciences-in acquiring knowledge in the principles of Politics & good Government."

Though it would be decades before George Washington's namesake university would be established by an Act of Congress, the George Washington University Law School-established in 1865-was the first law school in the District of Columbia. Today, the School continues to embody the aspirations of the nation's first president.

1865: Classes begin in the Old Trinity Episcopal Church, of which Francis Scott Key had been Senior Warden.

1866: GW Law is divided into two classes-Junior and Senior. The Course of Recitations "embraced the important departments of Common Law and its Commentaries; of Criminal, Commercial, and Admiralty Jurisprudence; and of Evidence and Pleading."

1867: Sixty graduates, from 22 of the then-37 states, receive degrees at the first graduation.

1870: The case method of instruction is introduced.

1878: The American Bar Association is organized.

1891: A course of lectures in patent law, given by the U.S. Commissioner of Patents, is established as a regular part of the curriculum.

1898: The length of the degree program is increased from two to three years. The Board of Trustees approves the requirement that examinations be given in all courses.

1900: GW Law takes part in the establishment of the Association of American Law Schools.

1924: A new building for GW Law named Stockton Hall is constructed on the main campus of the University.

1936: GW Law is designated a graduate school and the Juris Doctor degree is established.

1940: The degree of Doctor of Juridical Science is established.

1954: The National University School of Law, which held an important place in legal education in the District of Columbia since 1869, merges with GW Law. Among its distinguished alumni is Belva Lockwood (Class of 1872), the first woman to argue before the Supreme Court.

1965: The International and Comparative Law Program is established.

1966: The International Law Review is founded.

1969: The Community Legal Clinics are established.

1970: The Environmental Law Program is introduced in September.

1981: The Enrichment Program is established to enhance the intellectual life of the School.

1992: A summer program is established with Oxford University for the study of international human rights law.

2002: The newly renovated building at 700 20th Street is dedicated in an address by Justice Antonin Scalia.

2009: GW Law establishes the Center for Law, Economics & Finance (C-LEAF), a think tank designed as a focal point in DC for the study and debate of major issues in economic and financial law. The LL.M. in Business and Finance Law is introduced.

2011: This year marks the 40th anniversary of The Jacob Burns Community Legal Clinics. 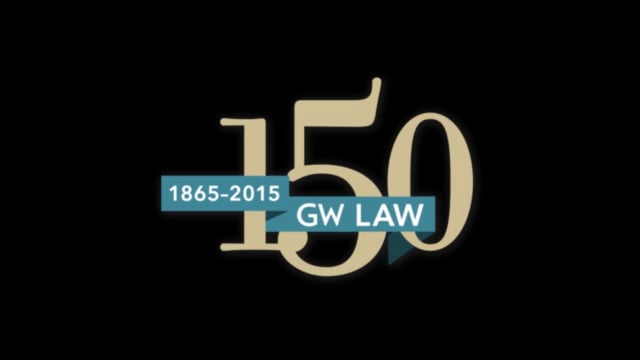 The law school has changed since its early days as a small, homogenous institution offering a few classes at the site of the old Trinity Church. Today, GW Law constitutes one of the largest, most renowned, and diverse members of the legal academy.

Explore the pivotal moments and key figures of the law school's storied past.

Read about the accomplished students who have passed through our classrooms over the generations.