Dayna Bowen Matthew, JD, PhD, is the Dean and Harold H. Greene Professor of Law at the George Washington University Law School. Dean Matthew is a leader in public health and civil rights law who focuses on racial disparities in health care. She joined the UVA Law faculty in 2017 and is the author of the book Just Medicine: A Cure for Racial Inequality in American Health Care.

At UVA, she served as Co-Founder and Inaugural Director of The Equity Center, a transdisciplinary research center that seeks to build better relationships between UVA and the Charlottesville community through community-engaged scholarship that tangibly redresses racial and socioeconomic inequality.

Dean Matthew previously served on the University of Colorado law faculty as a Professor, Vice Dean, and Associate Dean of Academic Affairs. She was a member of the Center for Bioethics and Humanities on the Anschutz Medical Campus. Dean Matthew held a joint appointment at the Colorado School of Public Health.

Dean Matthew also has taken on many public policy roles. In 2013, she co-founded the Colorado Health Equity Project, a medical-legal partnership incubator aimed at removing barriers to good health for low-income clients by providing legal representation, research, and policy advocacy. In 2015, she served as the Senior Adviser to the Director of the Office of Civil Rights for the US Environmental Protection Agency, where she expedited cases on behalf of historically vulnerable communities besieged by pollution. She then became a member of the health policy team for US Senator Debbie Stabenow of Michigan and worked on public health issues.

During 2015-16, she was a Robert Wood Johnson Foundation Health Policy Fellow in Residence in Washington, DC, and pivoted her work toward population-level clients. She forged relationships with influential policy groups such as the Brookings Institution, where she is currently a Non-resident Senior Fellow, and the Congressional Black Caucus Foundation.

Before entering academia, Dean Matthew practiced as a civil litigator both in Kentucky, at the law firm of Greenebaum, Doll & McDonald, and in Virginia, at McGuireWoods, where her work primarily focused on the defense of medical care providers and corporate manufacturers in state courts, federal courts, and before administrative and licensing tribunals.

Dean Matthew graduated with an AB in economics from Harvard-Radcliffe and, after a brief stint as a commercial real estate banker, obtained a JD from the University of Virginia. While studying at Virginia, Dean Matthew served as an Editor of the Virginia Law Review, won the law school’s William Minor Lile Moot Court Competition, and taught as a Hardy Dillard Writing Fellow. Following graduation, she clerked for Justice John Charles Thomas, the first African American justice to sit on the Virginia Supreme Court. She taught at Virginia as an assistant professor from 1991 to 1994 and at the University of Kentucky as the Gallion & Baker Professor of Law and Medicine from 1999-2002. In 2018, she received a PhD in health and behavioral sciences from the University of Colorado at Denver.

Dean Matthew has written articles on health and antitrust law topics that have appeared in the Virginia Law Review, the Georgetown Journal of Law, and the American Journal of Law and Medicine, among others.

She is the recipient of several awards, including the Colorado University School of Law's Clifford Calhoun Faculty Award for Public Service (May 2015) and the Margaret Willard Award (2015, presented by the University Women's Club of Boulder). She was named one of the Top 25 Most Powerful Women (2016) by the Colorado Women's Chamber of Commerce. 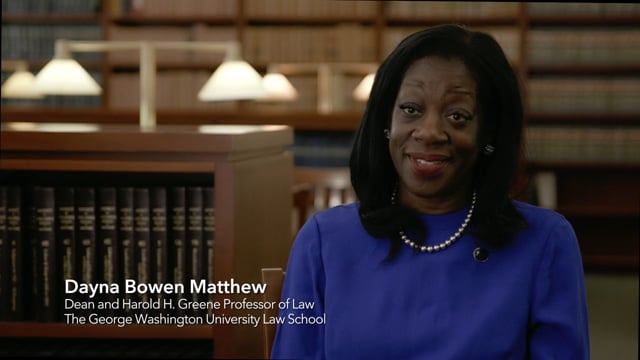 University of Virginia School of Law

“Who Gets a Vaccine First? US Considers Race in Coronavirus Plans” (The New York Times, July 9, 2020)